Administrator
View attachment 456
A man who set fire to the home of a Cornish mother-of-two as she lay inside has been jailed for 27 years and six months for her murder.
Care home assistant Corby Craze, 43, was found dead in her burnt-out home in Vivian Road in Bodmin in August 2010.
The jury at Truro Crown Court took just over four hours to find Terence Whitham, 33, from Bodmin, guilty of murder and burglary. He admitted arson.
Whitham was given four years for the burglary and two years for arson.
The sentences will run concurrently.
The court heard that on 13 August, Ms Craze met Mr Whitham for the first time in a Bodmin pub.
'Callous actions' She went on with him to a nearby pool club, where they were caught on CCTV.
Whitham later told police he hoped to have sex with her after he walked her home.
Whitham said Ms Craze got into bed fully clothed where she passed out.
He later stole items including a television and a laptop and set fire to the building. 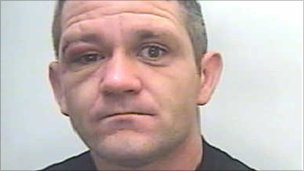 Whitham's blood was found on Ms Craze's pillowcase
The court heard Mr Whitham had been involved in a fight earlier in the evening and his blood was found on Ms Craze's pillowcase.
The prosecution alleged Whitham had set fire to her home to cover up a sex attack. He denied any sexual motive.
The jury heard that the defendant admitted to police he had taken items from the house and then started a fire to destroy the evidence.
He used Ms Craze's car to transport the stolen goods home before leaving the vehicle burn-out.
Ms Craze's family said they were pleased Whitham had been found guilty of the murder of a "caring, bubbly and fun" person.
They said in a statement: "What he did was a wicked and terrible thing and words cannot begin to describe how we feel about him.
"He took away a mum, daughter, sister and auntie.
"Corby was only 43 and had a lot of living to do. She was loved by a lot of people both family and friends and the people she cared for."
Senior investigating officer Det Insp Stuart Ellis said: "The actions of Whitham on that evening were callous and devastating.
"I hope that the conclusion of this trial will help Corby's family in coming to terms with their sad loss."
Article BBC
You must log in or register to reply here.
Share:
Facebook Twitter Reddit Pinterest Tumblr WhatsApp Email Share Link
Top Bottom